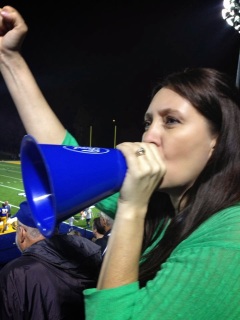 Oh no they didn’t! Did they really give me a megaphone as I walked into my son’s high school football game? I have the stage now! This is exactly what I need- an audience! Just in case anyone has ever had a hard time hearing me, the problem has been solved. Unfortunately- I really don’t know much about football, and the truth is, the only football team that I follow is the one that my son plays on. I don’t even know the rules, but I’m not a complete idiot- I clap when our side claps, and now, thanks to my shiny new megaphone, I shout out whatever the guy in front of me is shouting- “That’s a live ball, Ref! Are you blind? That was holding, you dumb-ass!” Or on the lighter side when he screamed something, I just grabbed my megaphone and shouted, “Yeah!” to back up what he was saying.

I do however know that once I can see one of our guys has the ball, (I mean let’s face it- it takes me half the play to see where the hell the ball is)  I can jump up and cheer for us to run, run, run! I look downright mean in this photo, but truthfully, our team was on top of it this evening and did very well. There were no real problems. I just played around with my new toy.

The real problem is going to happen when basketball season starts. I don’t know all the rules in basketball either, but I do have a lot more opinions and emotions when he plays basketball. I get mad at everyone in the room, I hate everyone who isn’t my son’s biggest fan and I find it very hard to control myself in there and I’m fairly certain that on a recent  trip with my husband and aquaintances, I called certain people involved douchbags- or something quite similar over drinks- several, many drinks. My bad 😦 The only way I’ve ever been able to keep my shit together is knowing that my son would never forgive me for causing such a scene at his game- knowing in all truth that most of the people I’m screaming at in basketball aren’t paying any attention to me and can’t hear me…UNTIL NOW. See you at the basketball games, you f*#&^ers!